Lyophilized for intramuscular or subcutaneous injections 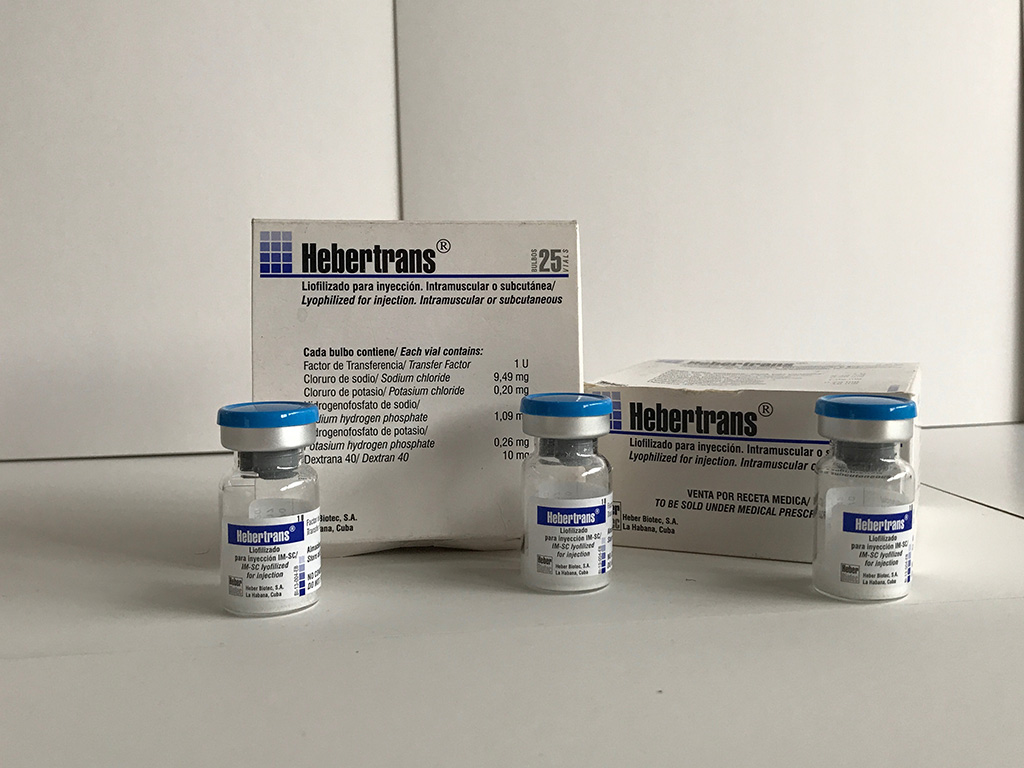 Each ampoule contains: the extract of leukocyte subject to dialysis obtained from human leukocytes 1U (1mg of the total quantity of proteins)

Measures: In the extracts of leukocytes subject to dialysis, with the activity of the transfer factor, various measures connected to immune system have been described, whether the antigen is specific or non-specific. Among the first ones there are: slower transfer of hypersensitivity, stimulation of the production of the inhibitory Leukocyte migration inhibition factor

(LIF), production of the inhibitory Macrophage migration inhibitory factor (MIF), increase of the number of lymphocytes subject to the stimulation by antigens and increase of the size of the cells that produce rosettes with erythrocytes of a sheep.

The non-specific properties are of great help such as: stimulation of blasted transformation of lymphocytes by phytohemagglutin, stimulation by cytotoxic antibodies and stimulation of the activities NK. The extract of the leukocyte subject to dialysis contains, besides the molecules which are immunosuppressive and which stimulate bone marrow.

It is recommended the use of Hebertrans in the following pathologies:

The persons with cell immunodeficiency:

In these cases, immunodeficiency noticed by testing hypersensitivity of skin, blasted transformation, production of LIF, active and spontaneous rosettes, or testing the quaintly lymphocytes in blood, is caused by bacterial, viral, mycosis and parasite infections, whether persistent or repeated.

Hebertrans was used in various test studies, controlled or blind studies, by children and adults with the fall of the immune system which match with: amigdalitis, infection of respiratory organs which appear more or less frequently, serious sepses at the department for intensive care, including burns; urinary infections; keratomycosis; lung tuberculosis and infections with herpes zoster and common herpes. In these cases there comes to normalization or significant improvement of the signs of cells immunity, as well as the benefit to the patients in the clinical sense.

In the controlled study, the time of appearance of the lesions and pain has been significantly reduced from 5.9 and 7.1 days from the daily application of the dose of 1U Hebertrans in the period to 5 days. The complications in all the cases were avoided, such as the repeating of post herpes neuritis. And the good results in isolated cases of eye herpes zoster were also noticed.

During the pilot study on the patients with common repeating herpes on genital organs, face, and other locations, there came to reducing the period of appearance to 1-5 days, as well as removing (28%) and reducing (43%) of the relapse during the year of observation, after the application of Hebertrans during 6 week. In all the cases the clinical image was not so serious any more. This result was proved by the controlled blind study. After 18 weeks of treatment there came the significant reducing of relapses and duration of lesions. After 18 months, the patients who received Hebertrans were completely cured (67%) or their condition was improved (33%). For the children with mucous membranes herpes with repeating infection and cell immunodeficiency, the use of Herbertrans was proved as successful in reducing the time of healing the lesions in reducing the number of relapses and in normalization or improvement of the indicators of cell immunity. It is also noticed the progress in treating serious cases of herpes meningoencephalitis. In the case of herpes keratitis the regular use of Hebertrans in the combination with antivirus therapy in the blind study there came the reducing in frequency of the appearance of complications (p≤0.008) (uveitis, corneal dystrophy), as well as shortening the time for which the lesions are cured (p ≤0.002).

For the patients who were noticed neoplasia, Hebertrans was used with catalysts if their immunity was improved. It could be noticed the improvement in the cases with sepsis, operated patients as well as during the recovery from serious cases of leucopenia caused by leukostatics.

In the controlled case study of external bronchial asthma, with the deficiency of evidence of immune cells treated by Hebertrans during 5 weeks, which continued during the year, there came to removing (60%) or to reducing (17%) of the frequency of bronchial spasm crisis, with the normalization (70%)  or reducing (12) of the value lgE and increase to normal values (78%) and the size of the cells which create active rosettes and to the proved late hypersensitivity of skin.  For the children with atopic dermatitis, the treatment with Hebertrans there came to the clinical and laboratory improvement in 11 of 12 cases where the disease caused the weakness of the immunity of cells, but did not have the effect in 10 cases of normal cell resistance.

The good results of using Hebertrans were noticed with the patients with allergic  kerato conjunctivitis.

Hebertrans is not recommended for the patients with hypersensitivity to dextran or any other of the salts used during preparation.

It does not contain preservatives. You should use it immediately after you squeeze out the pill and reject the rest. The pill is resolved in 1 ml of water for an injection avoiding creation of foam, because of which it is recommended for the liquid to slowly fall on the walls of the vessel. Do not use it if it becomes turbid or changes color.

Pregnancy or lactation: There are no studies on which Hebertrans is used by pregnant women, or in the period of lactation. Because of that, the use is not safe. A doctor should do the analysis of risk in each case before using it.

Using in pediatrics: Hebertrans was used by the children with primary immunodeficiency and infections which were repeated, especially of upper respiratory organs, infections caused by herpes etc. No important side effects have been reported nor the disorders of psychosomatic growth or development in spite of many-month treatment.

Besides light erythema on the location of the injection in 2% of cases, no important side effect of using Hebertrans was reported.

Interactions with other medicines and other forms of interactions

For adults, the dose of 1U is most frequently used. For children the dose of  1-2U per m2 of body surface is used.

The frequency of using the medicine can vary depending on the diagnose and the development of diseases:  between 1U daily to 7 days and one to 2U weekly; for some patients with chronic diseases the treatment can be prolonged to 6 months.

Store at the temperatures between 2° and 8° C