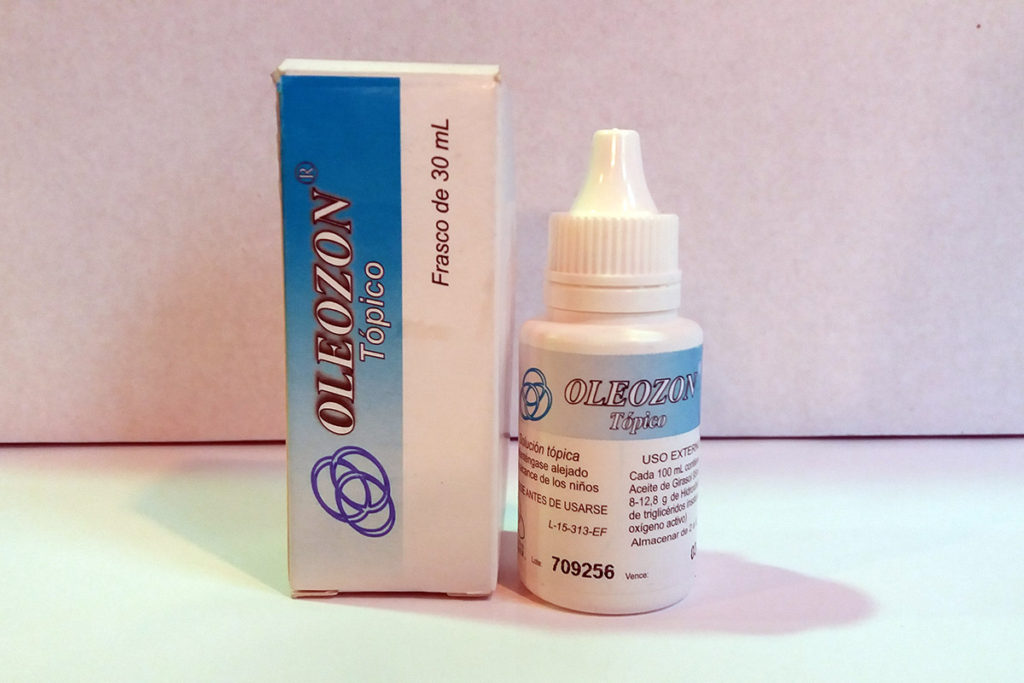 Ozonized sunflower oil for external use OLEOZON Topiko is a preparation derived from the reaction of ozone and sunflower oil, according to the process developed by the scientists from the National Center for Scientific Researches (CNIC) from Havana. Active pharmaceutical ingredients identified and measured in this preparation are the mixtures of ingredients which are of peroxide nature, such as hydroperoxides and ozonides of lipid nature.

Oil solution OLEOZON Topiko shows extreme germicide effects, because of which it is used to treat infections caused by fungi, bacteria and viruses. This product stimulates tissue regeneration and its use does not cause side effects, which has been proved by detailed pre-clinic examinations. It successfully passed all the pre-clinic toxicological examinations and all the requests of general toxicological studies (acute and sub-acute toxicity), local toxicology (skin irritation, ophthalmologic irritations, phototoxicity and sensitivity) and special toxicity (tests of teratogenicity and mutagenicity ). The complete results obtained by examining of this preparation guarantee the safety of the preparation.

In the pharmacological point of view, all the examinations were done in Cuba in vitro, as well as in vivo, which guarantee antifungal and antibacterial effects of the oil solution OLEOZON Topiko. The antifungal effect of OLEOZON Topiko has been confirmed in vitro, on various kinds of fungi of the sorts of dermatophytes of clinical significant, as well as of the kinetics of mortality. It has been concluded that OLEOZON Topiko, is efficient up to 18 months against three examined dermatophytes Microsporum canis, Trichophyton rubrum i Trichophyton mentagrophytes. These dermatophytes are of the most frequently isolated microorganisms of in the patients with dermatophytosis.

Antibacterial effects of OLOEZON Topiko were also being examined, in vitro on various bacteria of clinical interest. It was concluded that OLEOZON Topiko showed antimicrobial effect, even to the sorts that have been clinically isolated to skin infections, and which are resistant to beta-lactam antibiotics, vancomycin and gentamicin. Besides that, it has been proved that Oleozon Topiko very successfully eliminates micro-bacteria.