(Chemical compound of recombining growth of the human epidermis, joined with recombining protein) 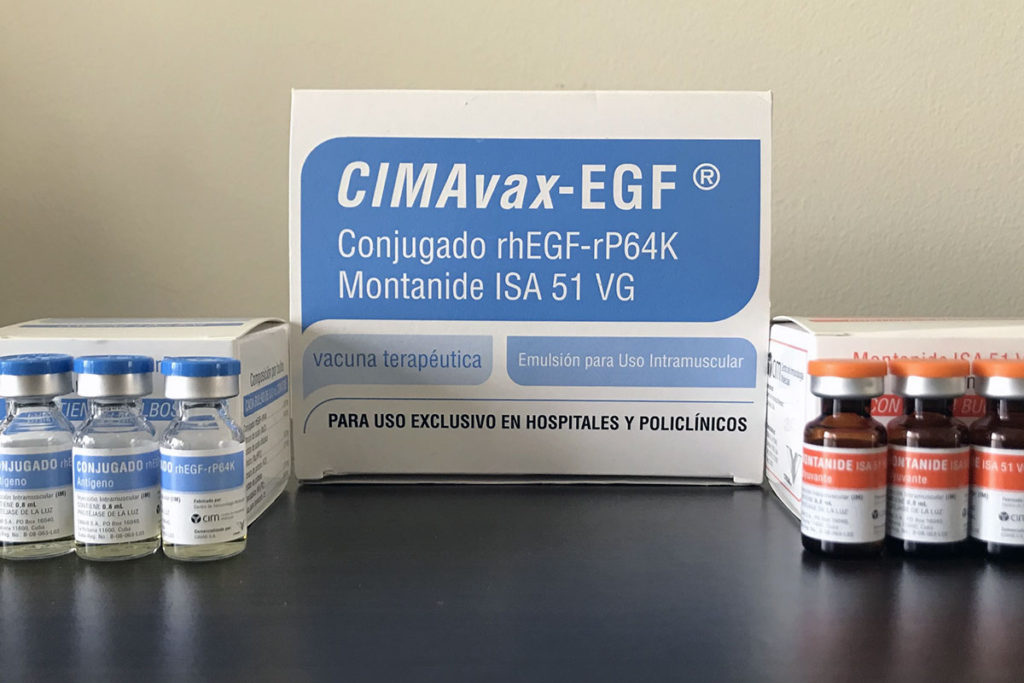 Each bottle of the compound hrEFG-Rp64k contains:

Each bottle of the oil catalyst contains:

CIMAvax®-EGF is recommended to the patients who suffer from lung cancer of non-microcellular cells, in a progressive phase (IIIb/IV), after previously taking cyclophosphamides.

CIMAvax®-EGF  is not recommended to pregnant women or women who breastfeed, patients allergic to chemical or biological ingredients of the medicine similar to the vaccine, patients who suffer from some other diseases which is not controlled and which includes active infections, symptomatic heart diseases, unstable angina pectoris and heart arrhythmia. It is also not recommended to the patients who used to suffer from hyper sensibility to cyclophosphamide as well as to pediatric patients.

CIMAvax®-EGF has to be applied cautiously to the patients who have the problems with kidneys and hepatitis.

SPECIAL WARNINGS AND PRECAUTIONS DURING THE USE

It should be checked the creation of the emulsion before the application of CIMAvax®-EGF.

Various vaccines which contain EGF as the main active ingredient were used on 6 clinical examinations and the patients who suffer from the lung cancer in the advanced phase were treated.   CIMAvax®-EGF was very well tolerated. The most of harmful effects were marked as light or moderate. The most frequent systematic harmful effects consisted of redness, anorexia, cramps, trembling, headaches, nausea, vomiting, high temperatures, difficulty in breathing, fever, hypertension, or arterial hypotension. Some local harmful effects were also noticed such as erythema and the pain at the injection site. Besides using CIMAvax®-EGF, some more serious system harmful consequences such as headache, trembling, difficulty in breathing, chest pain, sweating, slightness and feeling of general discomfort can also appear.

DOSING AND THE WAY OF APPLICATION

Each dose of CIMAvax®-EGF consists of 4 injections which are applied to various places: both gluteal and deltoid areas. Each injection contains 1,2 mL of the emulsion which contains the compound hrEFG-Rp64k and Montanid ISA 51 VG.

The treatment consists of one phase of induction which begins with the application of cyclophosphamide (one dose of 200mg/m2). Three days later the application of CIMAvax®-EGF started, all the 14 days during the first 4 doses. The phase of maintenance consists of monthly re-immunizations which last until the general condition of the patient improves.

CIMAvax®-EGF is injected in muscles.

INTERACTIONS WITH OTHER MEDICAL PRODUCTS AND OTHER FORMS OF INTERACTION:

It is not known the immunogenicity of the product CIMAvax®-EGF to any of the patients who receive cytotoxic therapy or any other immune suppressive medicament.

APPLICATION OF THE MEDICINE OF PREGNANT WOMEN OR THE WOMEN WHO BREASTFEED:

It is not recommended the use of CIMAvax®-EGF during pregnancy or lactation .

The consequences of CIMAvax®-EGF, for driving vehicles or operating machines, are not known.

The consequences of overdose by the medicine CIMAvax®-EGF are not known.

Epidermal growth factor (EGF) is a polypeptide molecule of 53 amino acid, of the molecular weight 6045 kDa, which was for the first time isolated in the sublingual gland of a rat. The EGF is a peptide which is capable to stimulate (in vitro i in vivo) the proliferation of epithelial and mesenchymal cells by the receptors in membrane.

In the recent years, the receptor EGF (EGF-R) has turned into the target which has very much been researched in the treatment of cancer.

EGF-R is a membrane glycoprotein of 170 kDa, of which the influence in a cell is connected to specific kinase activity of the tyrosine. When the ligands activate “EGF-R” the regulation of the cell cycles changes, the proliferation increases, and the apoptosis is blocked, the angiogenesis progresses, the mobility, susceptibility and invasiveness of neoplastic cells increases. The ligands of EGF-R in EGF, besides the alfa transforming growth factor (TGF α) include epigen, epiregulin, betacellulin and epidermic growth factor from the union to heparin (HB-EGF). The expression EGF-R appears more in the third of the total number of tumors of epithelium origin, including the neoplasia of lungs, prostate, breast, colon, head and neck, ovaries, cervix, esophagus, stomach, pancreas, kidney, and astrocytic tumors.

Most tumors of lungs of bigger cells (CPCNP) magnify the receptor EGF. The magnifying of the EGF-R can be connected to a bad prognosis. In the research done on 121 patients with CPCNP the magnifying of EGF-R was monitoring in 83% cases with extremely negative prognosis. The system EGF/EGF-R is a good candidate for treating appropriate tumors. Many clinical researches studied the use of inhibitor EGF-R for the purpose of treating CPCNP. The vaccine CIMAvax®-EGF contains human recombining EGF, obtained from the cell of yeast Saccharomyses cerevisiae, together with the transporting protein P64k from Neisseria meningitides, also recombining and obtained from the cell of Escherichia added to Montanid ISA 51 VG.

The results of the clinical examinations and the examination of the Phase II with CIMAvax®-EGF on adult patient in the advanced phase of CPCNP show the efficiency of this medicine.

Pharmacokinetic studies are not necessary for the vaccine because the kinetic properties are antigen, they themselves do not contain useful information for the recommendations concerning the doses of the vaccines.

CIMAvax®-EGF prolongs the lives of the patients with CPCNP in the advanced phase comparing to the control patients who are treated by the best support therapy. The respond to the treatment is connected to the immune respond. The immunization by the vaccine induces the appearance of special antibodies against EGF, which provoke immunology depriving or immunology “castration” of this protein.

Keep at the temperature from 2 to 8○ C

© 2021 Cuba Medic - Treatment of all types of cancer, diabetic foot and immunology.